Posted by Jokoblitar@gmail.com at 4:20 AM No comments:

The U.S. Centers for Disease Control and Prevention said tests show some of the Mexico victims died from the same new strain of swine flu that sickened eight people in Texas and California. Of the 14 samples tested from Mexico, seven were matches, said the CDC's acting director Dr. Richard Besser.

Mexico put the confirmed toll at 20 dead, but 40 other fatalities were being probed, and at least 943 nationwide were sick from the suspected flu, the health department said.

Scientists said the virus combines genetic material from pigs, birds and humans in a way researchers have not seen before.

“We have what appears to be a novel virus and it has spread from human to human,” he said. “It’s all hands on deck at the moment.”

President Felipe Calderon cancelled a trip and met with his Cabinet to coordinate Mexico’s response. The government planned to administer its remaining 500,000 vaccines from the flu season to health workers, the highest risk group, although it is not known how effective they are on swine flu. It said it also has enough oseltamivir, the generic name of Tamiflu, to treat 1 million people, but the medicine will be strictly controlled and handed out only by doctors.

The CDC says Tamiflu and Relenza do seem effective against the new strain. Roche, the maker of Tamiflu, said the company is prepared to immediately deploy a stockpile of the drug if requested. Both drugs must be taken early, within a few days of the onset of symptoms, to be most effective.

Authorities urged people to avoid hospitals unless they had a medical emergency, since hospitals are centers of infection.

They also said Mexicans should refrain from customary greetings such as shaking hands or kissing cheeks, and authorities at Mexico City’s international airport were questioning passengers to try to prevent anybody with possible influenza from boarding airplanes and spreading the disease.

But the CDC said Americans need not avoid traveling to Mexico, as long as they take the usual precautions, such as frequent handwashing.

“We certainly have 60 deaths that we can’t be sure are from the same virus, but it is probable,” said Health Secretary Jose Cordova. He called it a “new, different strain ... that originally came from pigs.”

Epidemiologists are particularly concerned because the only people killed so far were normally less-vulnerable young people and adults. It’s possible that more vulnerable populations — infants and the aged — had been vaccinated against other strains, and that those vaccines may be providing some protection.

All eight U.S. patients recovered from symptoms that were like those of the regular flu, mostly involving fever, cough and sore throat, though some of them also experienced vomiting and diarrhea.

Scientists have long been concerned that a new flu virus could launch a pandemic, a worldwide spread of a killer disease. A new virus could evolve when different flu viruses infect a pig, a person or a bird, mingling their genetic material. The resulting hybrid could spread quickly because people would have no natural defenses against it.

40 million died in 1918 pandemic
The most notorious flu pandemic is thought to have killed at least 40 million people worldwide in 1918-19. Two other, less deadly flu pandemics struck in 1957 and 1968.

Nobody can predict when pandemics will happen. Scientists had been concerned about swine flu in 1976, for example, and some 40 million Americans were vaccinated. No flu pandemic ever appeared, but thousands of vaccinated people filed claims saying they’d suffered a paralyzing condition and other side effects from the shots.

In recent years, scientists have been particularly concerned about birds. There have been deaths from bird flu, mostly in Asia, but the virus has so far been unable to spread from person to person easily enough to touch off a pandemic.

Closing the schools across Mexico City, a metropolis of 20 million, kept 6.1 million students home from day care centers through high schools, and thousands more were affected as colleges and universities closed down. Parents scrambled to juggle work and family concerns due to what local media said was the first citywide schools closure since Mexico City’s devastating 1985 earthquake.

Authorities also advised capital residents not to go to work if they felt ill, and to wear surgical masks if they had to move through crowds. A wider shutdown — perhaps including shutting down government offices — was being considered.

“It is very likely that classes will be suspended for several days,” Cordova said. “We will have to evaluate, and let’s hope this doesn’t happen, the need to restrict activity at workplaces.”

Past outbreaks
Mexico’s initial response in its overcrowded capital brought to mind other major outbreaks — such as when SARS hit Asia. At its peak in 2003, Beijing was the hardest-hit city in the world. Schools, cinemas and restaurants were shuttered to prevent the spread the deadly respiratory virus, and thousands of people were quarantined at home.

In March 2008, Hong Kong ordered more than a half million young students to stay home for two weeks because of a flu outbreak. It was the first such closure in Hong Kong since the outbreak of SARS, or severe acute respiratory syndrome.

Lillian Molina and other teachers at the Montessori’s World preschool scrubbed down their empty classrooms with Clorox, soap and Lysol on Friday between fielding calls from worried parents. While the school has had no known cases among its students, Molina supported the government’s decision to shutter classes, especially in preschools.

“It’s great they are taking precautions,” she said. “I think it’s a really good idea.”

Still, U.S. health officials said it’s not yet a reason for alarm in the United States. The six in California and two in Texas have all recovered, and testing indicates some common antiviral medications seem to work against the virus.

New strain has swine, bird and human viruses
Schuchat of the CDC said officials believe the new strain can spread human-to-human, which is unusual for a swine flu virus. The CDC is checking people who have been in contact with the eight confirmed U.S. cases, who all became ill between late March and mid-April.

The virus was first detected in two children in southern California — a 10-year-old boy in San Diego County and a 9-year-old girl in neighboring Imperial County.

The cases were detected under unusual circumstances. One was seen at a Navy clinic that participates in a specialized disease detection network, and the other was caught through a specialized surveillance system set up in border communities, CDC officials said.

Investigators have since discovered six more cases. That includes a father and his teenage daughter in San Diego County, a 41-year-old woman in Imperial County who was the only person hospitalized, and two 16-year-old boys who are friends and live in Guadalupe County, Texas, near San Antonio.

Puzzling cases
The Texas cases are especially puzzling. One of the California cases — the 10-year-old boy — traveled to Texas early this month, but that was to Dallas, about 270 miles northeast of San Antonio. He did not travel to the San Antonio area, Schuchat said.

No details were available about the eighth victim, a child from San Diego.

CDC officials described the virus as having a unique combination of gene segments not seen in people or pigs before. The bug contains human virus, avian virus from North America and pig viruses from North America, Europe and Asia.The virus may be something completely new, or it may have been around for a while but was only detected now because of improved lab testing and disease surveillance, CDC officials said.

It’s not known if the seasonal flu vaccine Americans got this winter protects against this type of virus. People should wash their hands and take other precautions, CDC officials said.

Antivirals ready if needed
Officials from the World Health Organization said on Friday that it was prepared with "rapid containment measures" including antivirals if needed to combat the swine flu outbreaks in Mexico and the United States.

But health authorities in the two countries have the resources required already in place and are "well equipped," WHO spokeswoman Aphaluck Bhatiasevi said in Geneva.

She said the United Nations agency saw no need at this point to issue travel advisories warning travelers not to go to parts of Mexico or the United States. WHO says it is in daily contact with U.S., Canadian and Mexican authorities and had activated its command and control center for acute public health events.

The WHO will convene a meeting of its Emergency Committee on international health regulations, probably on Saturday afternoon, she added.

Posted by Jokoblitar@gmail.com at 3:29 PM No comments: 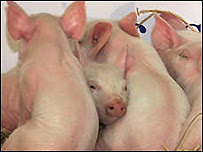 Posted by Jokoblitar@gmail.com at 3:16 PM No comments: